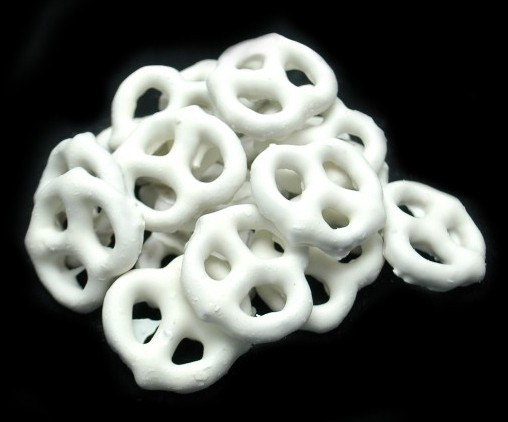 Most agree that pretzels have Christian backgrounds: According to Wikipedia, Pretzels originated in Europe, most likely among monasteries in the Early Middle Ages. According to The History of Science and Technology, in 610 AD "...an Italian monk invents pretzels as a reward to children who learn their prayers. He calls the strips of baked dough, folded to resemble arms crossing the chest, 'pretiola' ("little rewards")".

The pretiola’s popularity grew and spread to France and Germany, where it took on the German name, bretzel.  At some point, the bretzel and the pretiola became the pretzel!

Just as eggs are hidden today on Easter mornings, Pretzels were hidden and were particularly associated with Lent, fasting, and prayers before Easter within the Catholic faith.

In 1800s, Southern German and Swiss German immigrants, known as the Pennsylvania Dutch, introduced soft pretzels and pretzel bakery businesses to North America.  Lore has it that an apprentice in a Pennsylvania bakery fell asleep at work and overcooked a batch of pretzels; what seemed as inedible, hard knots of dough turned out to be an amazingly delicious, crunchy pretzel.

Now, elevate that pretzel with a whole new taste of decadent chocolate, and you’ve got yourself a wonderful combination of the hard pretzel bread, the saltiness of the crust, and the sweetness of the silky chocolate. 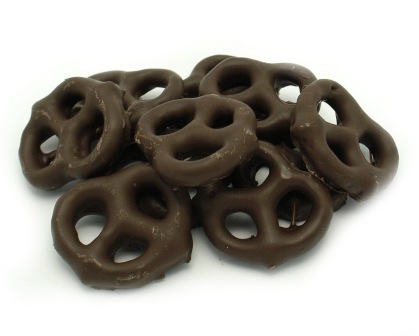 The precise history of the chocolate covered pretzel is quite a mystery; some historic sources suggest that Herr Franz Joseph Liebniz invented it in 1544 in Hamburg, Germany.  The story offers that he owned a pretzel bakery near a chocolate shop and the two owners experimented with the combination.

Many believe it is just a made-up story; well, just like other great things that happened throughout the history, what matters the most to the chocolate and pretzel lovers is that it was created!

After chocolate became a very fashionable drink throughout the 17th century Europe, people realized that everything tastes better when combined with chocolate.

Chocolate covered pretzels come in different types and shapes.  Some chocolatiers prefer smooth, rounded pretzels which they coat with different types of chocolate such as dark, white, semi-sweet or milk, while others like using pretzel sticks or bars, and either half-coat them or completely cover them with chocolate.  The American favorite - the curved version, enrobed in silky milk chocolate! 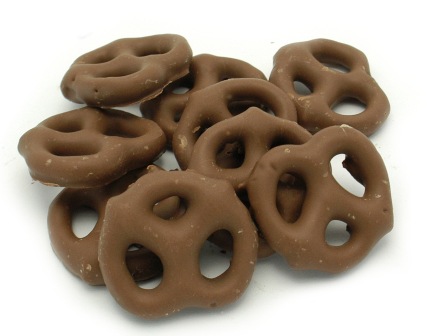 When it comes to their Majesty Chocolate Covered Pretzels, it needs to begin with the freshest, most twisted, and saltiest snacks that are nice and crunchy, then coated with luscious and smooth chocolate coating.  Here is where you can experiment and see what your palate enjoys the most: pretzels covered with milk, dark, or white chocolate.

Is your store well stocked with all of those mouth-watering treats?

For wholesale chocolate covered pretzels, and other delectable chocolate-coated snacks, your trusted source is Weaver Nut.